Book Review: A Boneshaking Ride on a Velocipede: The Beginning of Cycle Touring

Book Review: A Boneshaking Ride on a Velocipede: The Beginning of Cycle Touring

A Canterbury Pilgrimage/An Italian Pilgrimage, by Elizabeth Robins Pennell & Joseph Pennell, The University of Alberta Press, 2015 (with a wonderful and detailed Introduction by Dave Buchanan), 149 pages

Clad in a long skirt and, presumably, a corset as befit the 1880s, Elizabeth Robins Pennell set out on the front seat of a three-wheeled velocipede with her husband, the famed-illustrator Joseph Pennell. Having recently relocated from Philadelphia to London, England, the couple first journeyed from London to Canterbury (about 100k) along an old pilgrims’ route. Later, they tackled the longer adventure from Florence to Rome (about 275k), passing over the hills of Tuscany and Umbria. And less you think these rather short distances, maybe a day’s ride on a modern bicycle, the Pennells travelled without gears or, on occasion, any brakes either.

The recently married couple did what many a free spirit longs to do: they climbed aboard a bicycle and just went – for years, paying their way by writing illustrated stories about their cycling adventures for magazines, and turning them into a number of books. She, the primary writer; he, one of the world’s most talented illustrators, as evidenced by the 69 drawings (and photos) included in this reprinted version of the original scripts.

The Pennell’s account of these two journeys, along with a detailed introduction by Dave Buchanan in this slim book gives the reader an insight into the state of cycling in the late 19th century. Though this activity was becoming increasingly popular in England and the United States, the Pennells differed from most cyclists of the day: rather than partake in races as most did, the young couple preferred to tour – in tandem.

For the journeys described in this book, they sat one before the other between two shoulder-high metal wheels. Behind Joseph a smaller third wheel balanced the bicycle and carried a small rack for their suitcases. They both pedaled and had brakes and handlebars, though Elizabeth’s handlebars were situated behind her seat.

This rig, a Humber Tandem Tricycle, doesn’t just sound odd, it was unique in that it had three rather than two wheels. Nonetheless, it was included in a broad category of bicycles known, for obvious reasons, as “boneshakers.” By and large, it stood up to the Pennells’ adventures along roads that were often nothing more than rock-strewn tracks. But their brakes failed twice (while on steep descents) and the rack holding their suitcases let go as they arrived in Rome.

A Canterbury Pilgrimage/An Italian Pilgrimage is a beautifully illustrated quick read that gives the reader a wonderful sense of how cycling used to be. I was particularly interested in their description of cycling from Florence through Tuscany via Siena as I’ve pedaled these hills myself. Moreover, Dave Buchanan’s extensive (57-page) introduction puts the Pennells’ cycling stories into the perspective of the time.

If you are looking for a diversion, this is a great little book that is both interesting and beautiful.

To order a copy go to: University of Alberta Press. 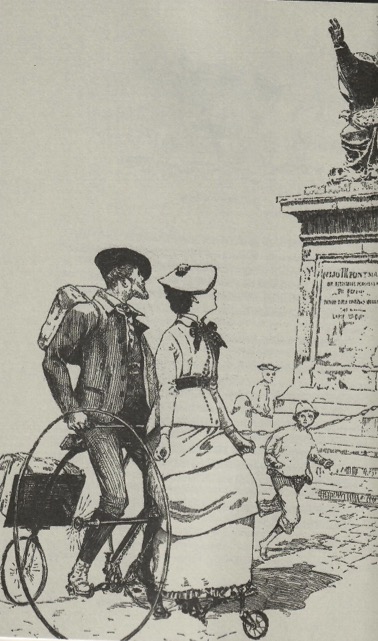